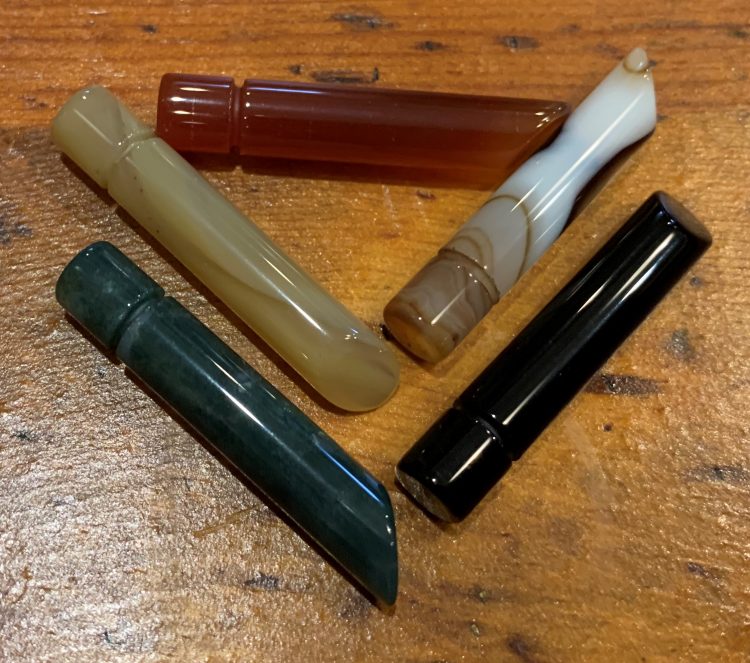 Selling, But Not Sold Out

New Images Of Complete Burnisher At The Bottom Of The Page.

Here’s a project that never came to fruition. Long, long ago GW contracted with a fellow from Nepal to make custom agate burnishers. They were awesome. Some of you may have one. The tips were “lipstick” shaped, thus presenting, with a turn of the wrist, a flat, a gentle edge, or a fully curved surface. When this source dried up, we took to selling another brand of agate burnishers – three styles, all decent, none ideal for our purposes as rodmakers. Eventually I took our drawings for the agate burnisher heads to one of the lapidary artists we work with – a cutter and polisher of stone rings under normal circumstances. After some play with sizes, I opted for a modestly scaled-down version of our original tips. We cut the tips long, so that they could be deeply set into a ferruled handle. We carved a ring into each, so that when set into epoxy within the handle, these tips would never wiggle fore or aft during use. Some months later, I received the batch. Perfectly cut & polished to brilliant perfection – ideal for burnishing the finest silk wraps on the most delicate of bamboo rods. That’s when I got busy with merely keeping up with orders and these tips languished.

The plan had been to turn a batch of handles from a lightweight wood with a connection to our tradtional craft. Spanish Cedar…but quilted Spanish Ceder just to bump the visual impression of the tools. Each handle would be just a few inches long, narrow at the neck so it could be grasped with a few fingers, but swelling into a ball that could be nestled in the cup of a maker’s palm, not unlike an engraving tool. Each handle would be drilled 1/2″ deep to accept the butt end of the agate tip. Each tip, prior to being epoxied in place would have the sunken butt end roughed up with a diamond bur for added tooth. Once each tip was glued into each handle, we’d add a ferrule…and the design wasn’t settled. Either we’d work up a batch of our Broad Winding Checks scaled to fit these burnishers, or we’d wind the ferrule’s span with close turns of nickel silver pinning wire. One way or the other, the ferrule would be yet another hat tip toward the craft for which these burnishers were intended.

Well, all that never happened and now it’s too late. I’ve bagged up these burnisher tips, five to a pack. Most packs have one of each stone/color: Red Carnelian, Natural Amber Agate, Moss Agate, Black Onyx, & Okapi Agate. Some of the agate burnishing heads are highly figured, some are not. The final few five packs are not evenly divided because we had more Carnelian (i.e., Red/Orange Agate) and Natural than we had of the other stones.

These burnishers would have been priced at $100.00 each. Now I’m selling the five packs of burnisher heads for $100.00/pack. If I was buying a pack, I’d practice on the Natural Agate…it’s entirely functional, but the least beautiful. Perhaps that one becomes your back-up burnisher tossed into your traveling tool kit. Then I’d pick a favorite from the remaining four tips and make a showpiece tool for your wrapping bench. The other three? You could make three burnishers to sell or to gift to rodmaking allies, or to donate to a rodmakers’ conclave.

Get ’em while we’ve got ’em, because we won’t be making more.

Oh, you will get a mixed pack of five – one of each stone type – until we’re sold out of these evenly balanced packs.  The final five packs are muddled – gorgeous tips, but not one of each stone type.  No choice – total luck of the draw.  Some burnishers are highly figured, some aren’t.  If you buy two or more packs in one order, I’ll aim to be sure that you receive a variety of stones in terms of figure (and in most cases it’s the Okapi that varies from mildly figured to highly figured; to a lesser degree – and when held to the light for inspection – the Moss and Carnelian show middlin’ figuration, the Natural may show a little change from piece to piece, and the Onyx – imagine this in stone dark as night – shows no variety from piece to piece).

For the curious, here are two “scaled” pictures of one of the original GW Agate Burnishers from which we took the inspiration for these tips.  The wood grid in the background is from my paper cutter.  Each block is 1/2″ square.  Note the flat spot on the handle, which prevents the relatively delicate agate burnisher from rolling off your bench onto the shop floor.

Our web store is closed. Thank you for 25 great years! Dismiss